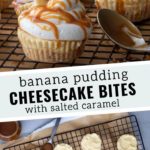 These are a big hit at spring and summer gatherings and they're pre-portioned so it's even easier for everyone to get a bit, but not too much. Here's how to make the layers:

This cookie crust is crazy easy. You just need a food processor or blender to get the job done in a couple of minutes.

To the food processor, you'll add about 18 Nilla wafer cookies, 2 tablespoons of melted butter and a tablespoon of brown sugar. Process until the mixture looks like wet sand.

Add a tablespoon of the mixture to each muffin cup and then press into the bottom with the tablespoon so that it is firm and goes up a bit on the sides. Bake in a 350˚ oven for 5 minutes to set the crusts.

Now we move over to the stand mixer or handheld electric mixer and get the banana pudding cheesecake filling made.

First, add 12 ounces of softened cream cheese to the bowl with ½ a cup of brown sugar. Beat those together on medium speed until the cream cheese gets a bit fluffy, which was about 2 minutes for me.

Next, you'll add ½ a cup of mashed ripe banana, a container of vanilla greek yogurt (or ⅔ cup), a beaten egg, and another teaspoon of vanilla and a teaspoon of baking powder. Back on the medium speed, you'll beat those until it's thoroughly blended.

Using a large batter or ice cream scoop, divide the batter over all 12 muffin openings. Bake in a 350˚ oven for 20 minutes or until just the center is a bit jiggly.

[su_highlight background="#a4bcb2" color="#ffffff"]TIP #2: FILL THEM UP![/su_highlight] You're going to have to fight your natural cupcake instincts to not overfill these. You want them almost to the top of the cupcake liner ( I left about ⅛ and inch).

After the cheesecakes have completely chilled they're ready to layer up with some extra yummy toppings.

Salted caramel sauce is easy to make IN THEORY because it's so few ingredients. However, I'd be lying to you if I said I haven't totally ruined or burned a few batches.

That being said - there are a ton of yummy pre-made options at the store which is what I do if I don't have the time or mental capacity to make my own. When I do make my own, though, I use this recipe from Danielle of Live Well Bake Often.

QUICK TIP: REMOVE THE CUPCAKE LINERS BEFORE ADDING THE TOPPINGS If you leave the cupcake liners on, you'll get giant pools of the caramel in the corners of the cupcake liners. I wait until the cheesecakes are fully chilled and then peel off the liners and add the toppings.

If you haven't made whipped cream before, it's really simple and you only need a couple of ingredients: heavy whipping cream. powdered sugar and a splash of vanilla extract.

Here's what you do - put all of those ingredients in your stand mixer bowl or a large bowl with an electric hand mixer and beat away on medium speed until stiff peaks form. Then spoon a big dollop over every mini cheesecake.

PRO TIP: GET A PASTRY BAG FOR THIS LOOK If you want to be extra - get a pastry bag with an extra-large coupler and circle tip. If you don't have one yet for about $10 you can get a full kit of everything you will ever need for baking.

Make Ahead and Storage

You can make the cheesecakes the day before and chill in the fridge (covered) overnight. When you're ready to serve them, add the caramel, whipped cream, and a banana slice.

Once they're decorated you have about 3 days (maybe 5, they don't last that long when I make them) before they're starting to get a funky texture and the moisture from the cheesecake and whipped cream just don't get along anymore.

We use cookies to ensure that we give you the best experience on our website. If you continue to use this site we will assume that you are happy with it.I'm Cool With Cookies