Surprise everyone with these sneaky and delectable brownies. Fudgy and rich red velvet brownies are bursting in the center with a layer of gooey cream cheese frosting.

Turn Red Velvet Brownies Inside Out

The best part of these brownies is the gooey layer of cream cheese frosting in the middle. They're easier to eat than frosted brownies and have a richer flavor and more fudgy texture than swirled brownies.

So here are all my tips and tricks to get the perfect cream cheese layer in the middle of your brownies.

[su_highlight background="#a4bcb2" color="#ffffff"]LINE THE PAN:[/su_highlight] Don't skip this or you can just throw out your frosting! A quick layer of plastic wrap enables this whole process to be pretty painless. It doesn't have t be pretty, just fully covered.

[su_highlight background="#a4bcb2" color="#ffffff"]MAKE THE FROSTING:[/su_highlight] The frosting is only 4 ingredients: cream cheese, softened butter, confectioner's sugar and a splash of vanilla extract. Simple whip these together with a whisk or electric mixer and the frosting is done.

[su_highlight background="#a4bcb2" color="#ffffff"]FREEZE SOLID:[/su_highlight] Here's the part that makes all the difference. If you don't freeze the frosting, you'll never be able to spread the top layer over it. Spread the frosting evenly across the entire pan.

Find the coldest part of your freezer and stash the pan there for at least 2 hours. The frosting layer should be almost frozen solid ( a little tacky is okay), otherwise the plastic wrap will not peel off when the time comes.

PRO TIP #1: USE A WET SPOON TO SPREAD THE FROSTING

If you're having a hard time spreading the cream cheese across the bottom of the pan, try wetting the back of a metal or plastic spoon and then spreading it out.

If the frosting starts to stick again, just dip it or run it under some water again and continue spreading. [/su_note]

How to Layer the Brownies

This batter is simple to make because you don't even have to separate wet and dry ingredients. Simply stir them into one bowl, one at a time. Then you get to the fun part - layering the brownies for baking.

[su_highlight background="#a4bcb2" color="#ffffff"]1. LINE THE PAN:[/su_highlight] If you don't have parchment, you can butter and flour the pan, however I have found parchment to be the easiest when it comes to getting the brownies out and cleaning the pan later.

[su_highlight background="#a4bcb2" color="#ffffff"]2. SPREAD THE FIRST BATTER LAYER:[/su_highlight] Using a scoop or large spoon, put half the brownie batter in the baking dish lined with parchment.

This layer will be very similar to spreading the frosting. The batter is thick, so use a wet spoon if you need, just make sure the layer is spread out evenly.

[su_highlight background="#a4bcb2" color="#ffffff"]3. TOP WITH FROZEN FROSTING LAYER:[/su_highlight] If your frosting is totally frozen, this layer should be a cinch. If it still moves, you're going to run into problems, so don't rush the freezing process.

Grab the plastic wrap on the sides to pull out the frozen frosting. Pull back the sides of the plastic to make sure it's not covering any of the top of the cream cheese, then flip the frosting layer upside-down on top of the spread brownie layer.

Once the cream cheese layer is in, you should have the plastic wrap on top. Starting in the corner, peel back the plastic slowly until it's completely off, then throw it out.

[su_highlight background="#a4bcb2" color="#ffffff"]4. SPREAD FINAL BROWNIE LAYER:[/su_highlight] We're in the home stretch! Just scoop the rest of the brownie batter out into the center of the cream cheese and spread it from the center out to the edges.

The layers can create air bubbles in the brownies. Tap the bottom of the pan a few times on the counter to get everything filled in.[/su_note]

[su_highlight background="#a4bcb2" color="#ffffff"]STORAGE: [/su_highlight] These brownies do well stored in room temperature for up to 5 days before they start to get stale. If you want to keep them around longer than that, then I would wrap them in plastic and put them in the fridge.

[su_highlight background="#a4bcb2" color="#ffffff"]WARMING:[/su_highlight] These brownies with their melty, gooey center really are the yummiest when warmed, but they can also be enjoyed at room temp. I like to put mine on a microwave-safe plate and warm an individual brownie for just 10 seconds on high and it's perfect.

What's the difference between red velvet cake and brownie batter?

When switching from an airy cake batter to a dense, fudgy brownie batter, it's all about changing the ratio of flour to fat. This recipe only calls for ¾ of a cup of flour and I added the melted chocolate chips to get that fudgy center for the brownies.

If you happen to prefer a more cakey brownie - feel free to add an additional ¼ cup of flour. I haven't toyed with this yet, though, so you're flying blind on cook time.

Why do they need to cool for so long?

Brownies are a lot like chicken breast - you have to pull them at the right time or you end up with a cracked, dry mess. You don't want to wait until the toothpick comes out clean or they get super cracked on top in the oven.

Take them out when they're still a bit underdone and leave them in that hot pan, they'll keep cooking while they set. So it's double duty. You just have to muster up the patience to not dig into them or it's all over!

I don't want to wait to freeze the frosting, can I just put it on top?

Definitely! This recipe is definitely a waiting game and there are shortcuts to be had. If you would rather save time and not wait for the freezing, make the frosting while the brownies set and spread it on after you pull them out.

I only call for a thin layer of frosting center (trust me, I tried a thicker one, it was just overkill). If you're putting it on top, though you may want more. Bump the cream cheese up the whole 8-ounce block, the butter up the ¼ cup and the sugar up to 1 ½ cups for a larger batch.

Another word of caution is that I don't know how cooking these brownies without the center will affect the cook time, so keep an eye on them early - like the 25-minute mark, to make sure they aren't overcooking without that extra layer of moisture in the center. 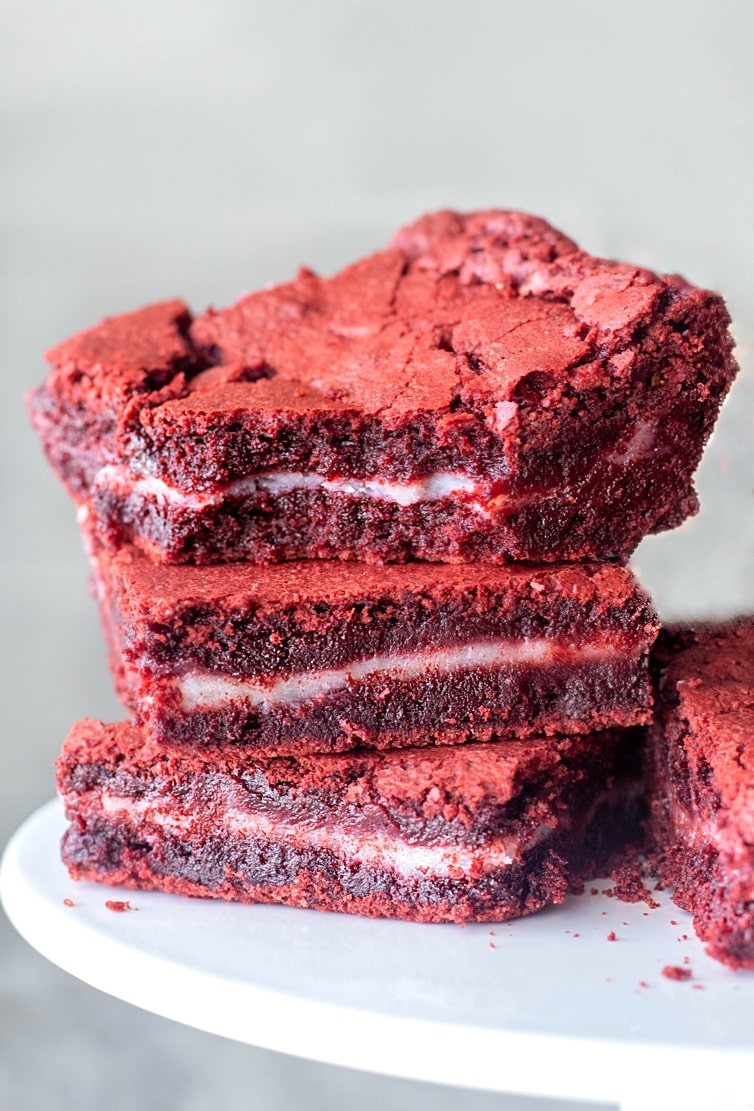 MAKE IT NOW, PIN IT LATER!

We use cookies to ensure that we give you the best experience on our website. If you continue to use this site we will assume that you are happy with it.I'm Cool With Cookies